A Tale of One Condo 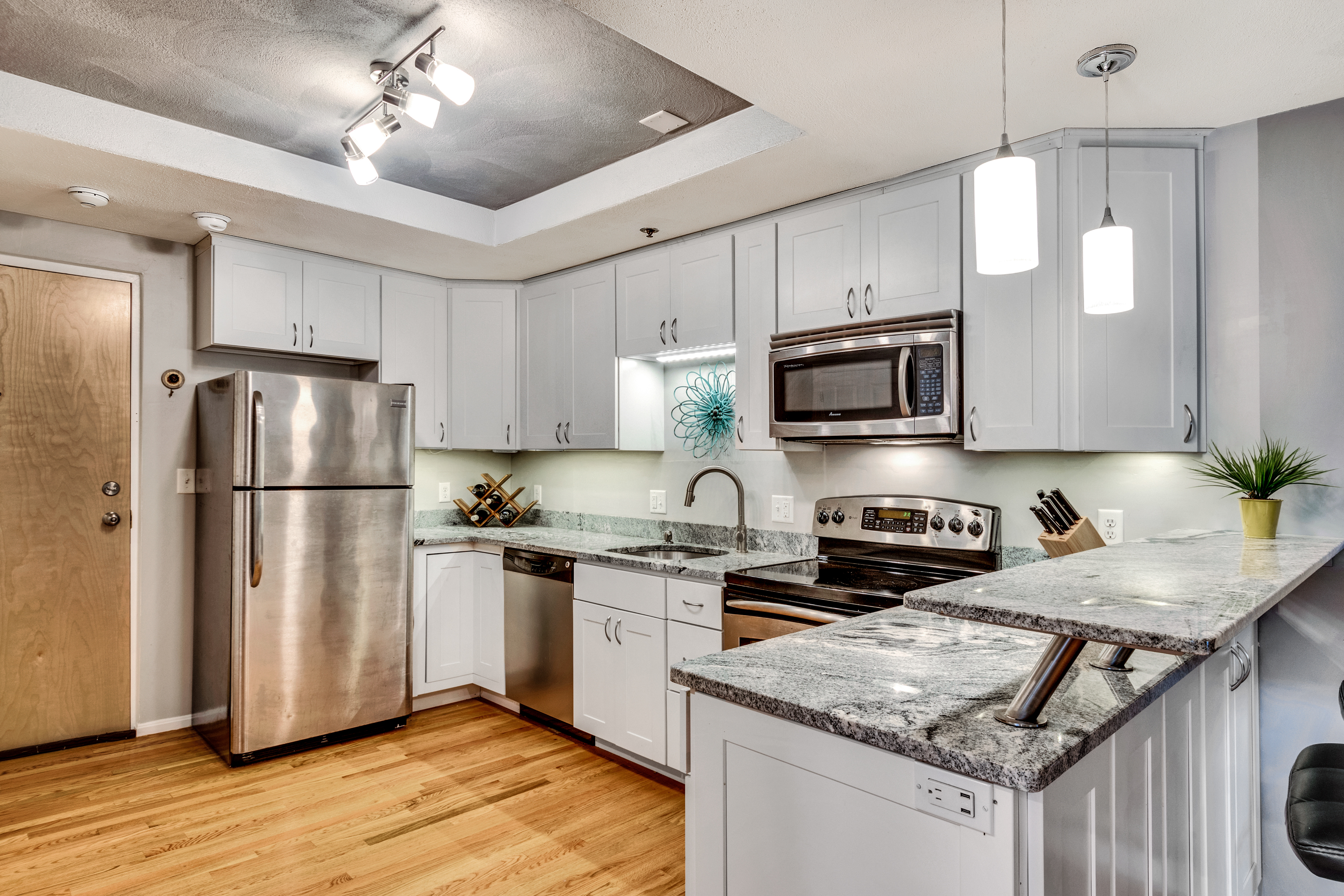 How much sprucing up does a realtor do to their own condo when preparing it for sale? Gather ‘round and I’ll tell you!

First of all, I need to mention that I had done an almost complete makeover before I stopped living there and began renting it out three years ago. It was still in impressive shape when I started the conversation with my tenants about putting it on the market, but I knew that there were a few changes I could make that would maximize the chances for the bidding war I was hoping to trigger.

Did I mention that the changes I made resulted in no less than 46 offers?

I’ll start with the small things first. Although I had painted all the walls three years ago, and swapped out the electrical outlets / light switches, I didn’t paint the baseboard heaters. Bam! $4 on a tiny can of Rustoleum, $5 on sandpaper, and $7 on a brush (along with some elbow grease) brought those puppies straight from 1984 to 2018. Next came the bathroom ceiling: an $11 can of ceiling paint freshened that right up. Although they were small and almost unnoticeable, the door hinges were still the original dirty brass ones that came with the place when I bought it in 2013. $24 and an hour later had them looking like new construction. Also, I could clean all the windows, mirrors, shower myself, rely on my tenants to do it to the level I knew would make the place shine, or I could pay a cleaning company to do it. One call to Ariana Ruckle and $35 was WELL worth it! 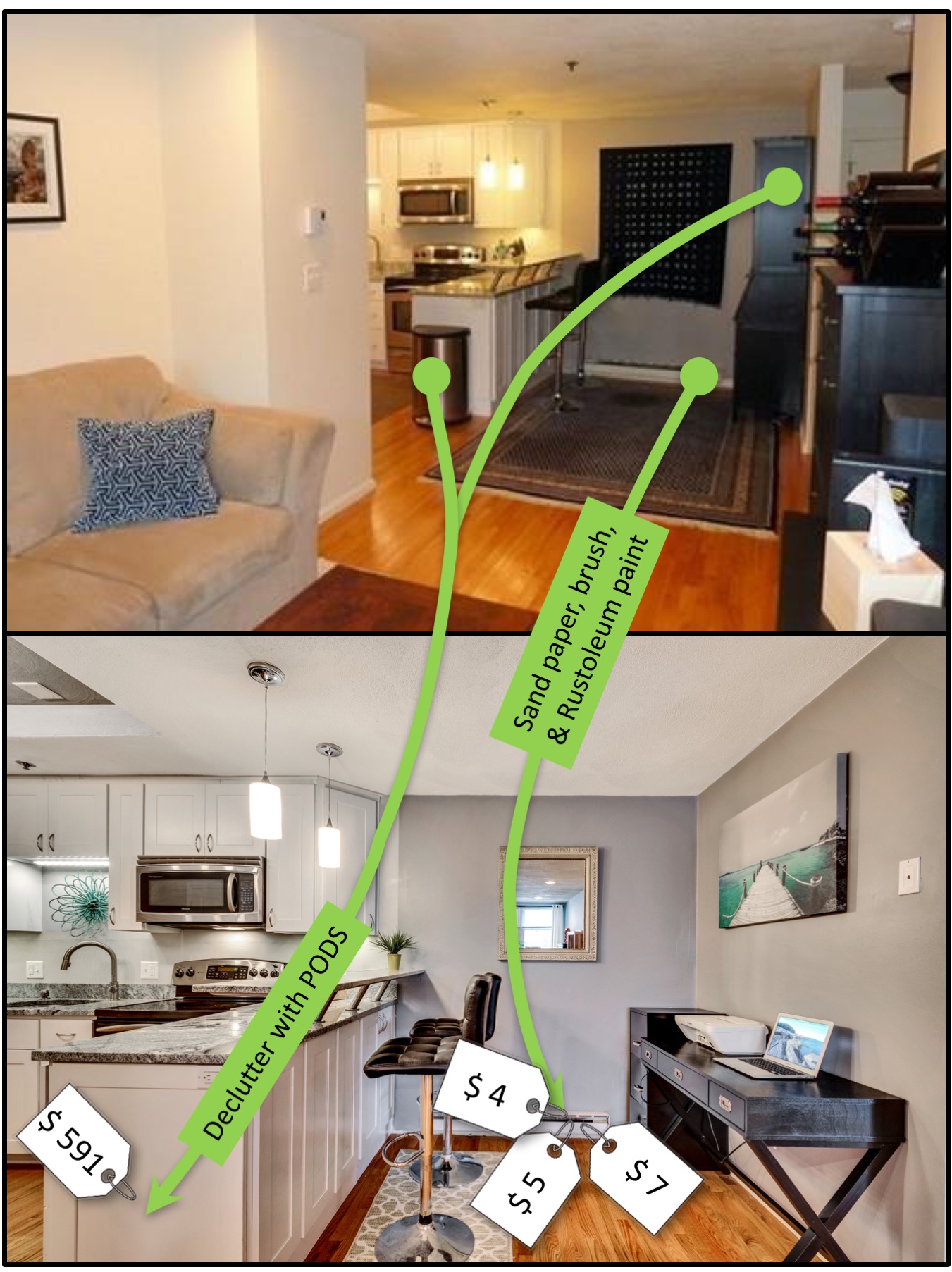 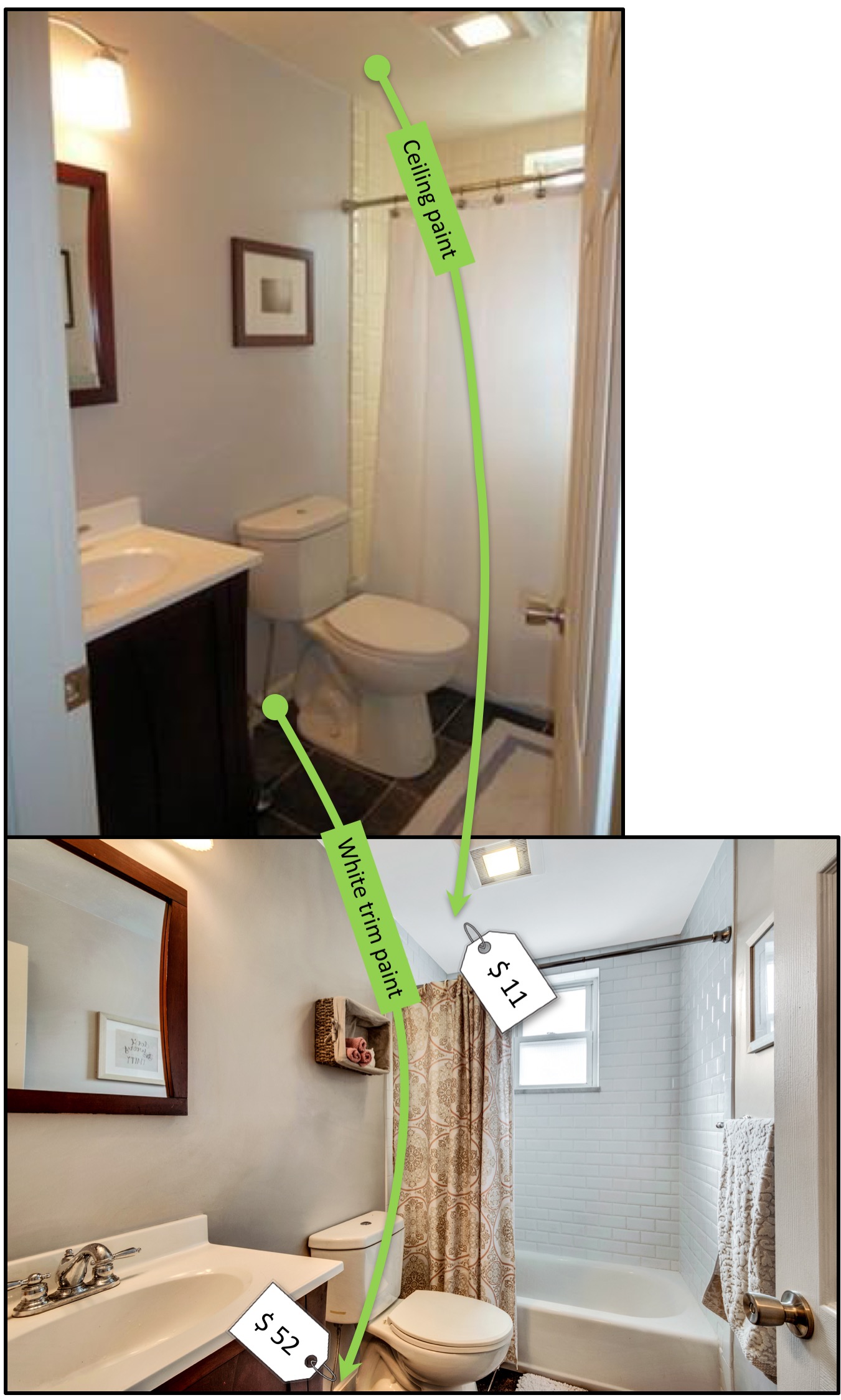 Hmm; the pantry door in the kitchen was totally fine despite being basic, flat and boring. Should I worry about replacing it? YEP! I would never have guessed that I could buy a pre-primed hollow door for $38. Moving on from there, all the trim was light-colored already, but it wasn’t new-construction sparkling white. Do I painstakingly get on my hands and knees and spend the time to paint every inch of it with a couple coats of gloss white? There’s no question that a dose of suck-it-up and $52 was the right decision to make the trim look brand new. Now we’re getting somewhere.

On to the bigger projects. $155 for three gallons of no-VOC latex paint had the living room and bedroom walls looking a lot more welcoming that the old beige did. The tenants were neat, but not home-sale neat, and most of their stuff needed to go on “vacation” during the open houses and showings. $591 got me a relatively-large PODS for them to put most of it in. The door from the common hallway to the condo had been (and still was) fully functional and sturdy. However… it had a crack in it from who knows what, and made it look like someone had tried to break in at some point. Could I have sold the condo with a cracked door? Definitely. Would it have scared off some of the 46 buyers who wrote offers? Probably. Thanks to Phil and his crew at P&M Lock down the street, $845 got me a new door that looked, smelled, and tasted (I mean, what…? Who would taste a door?) incredible. 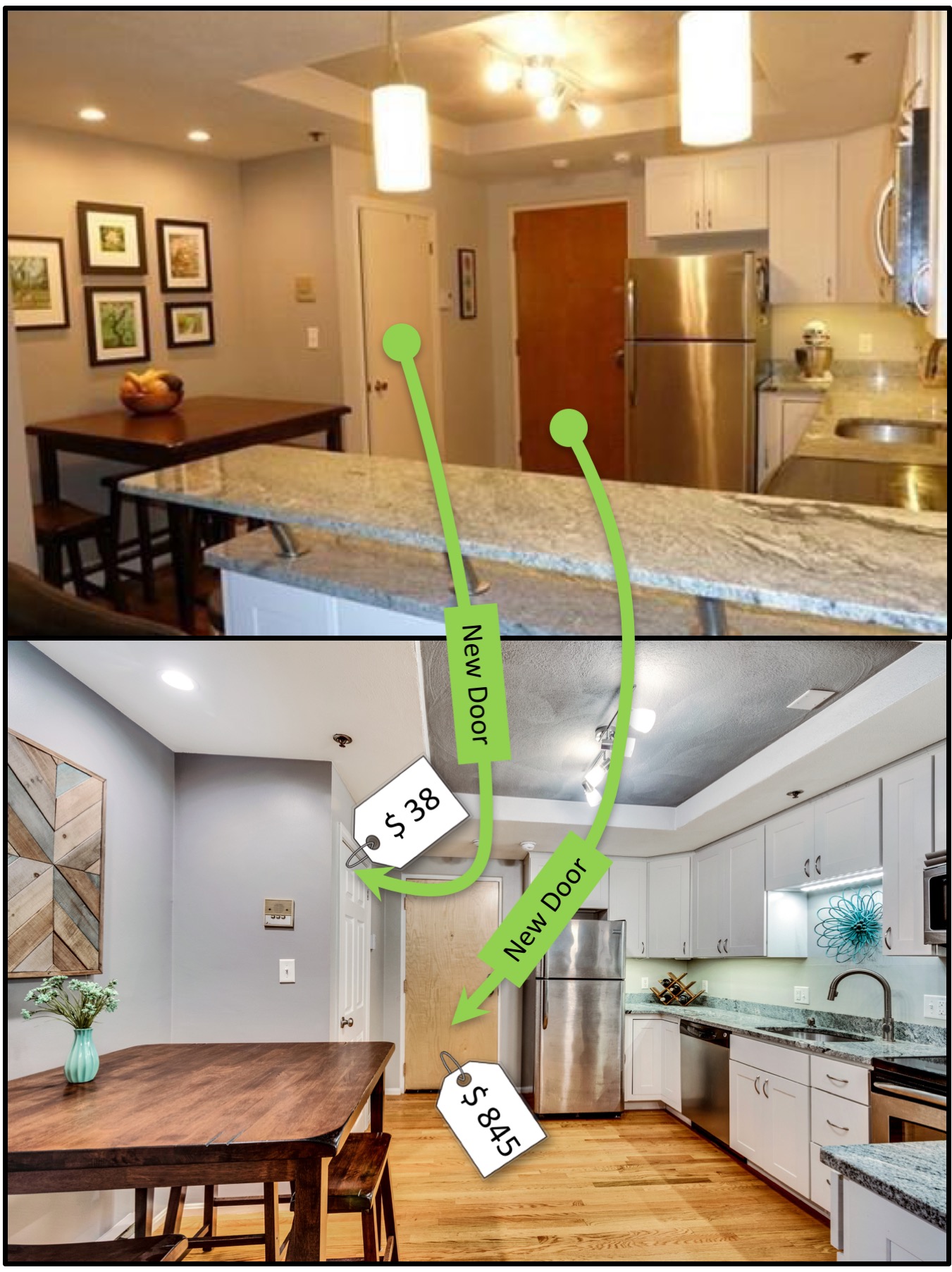 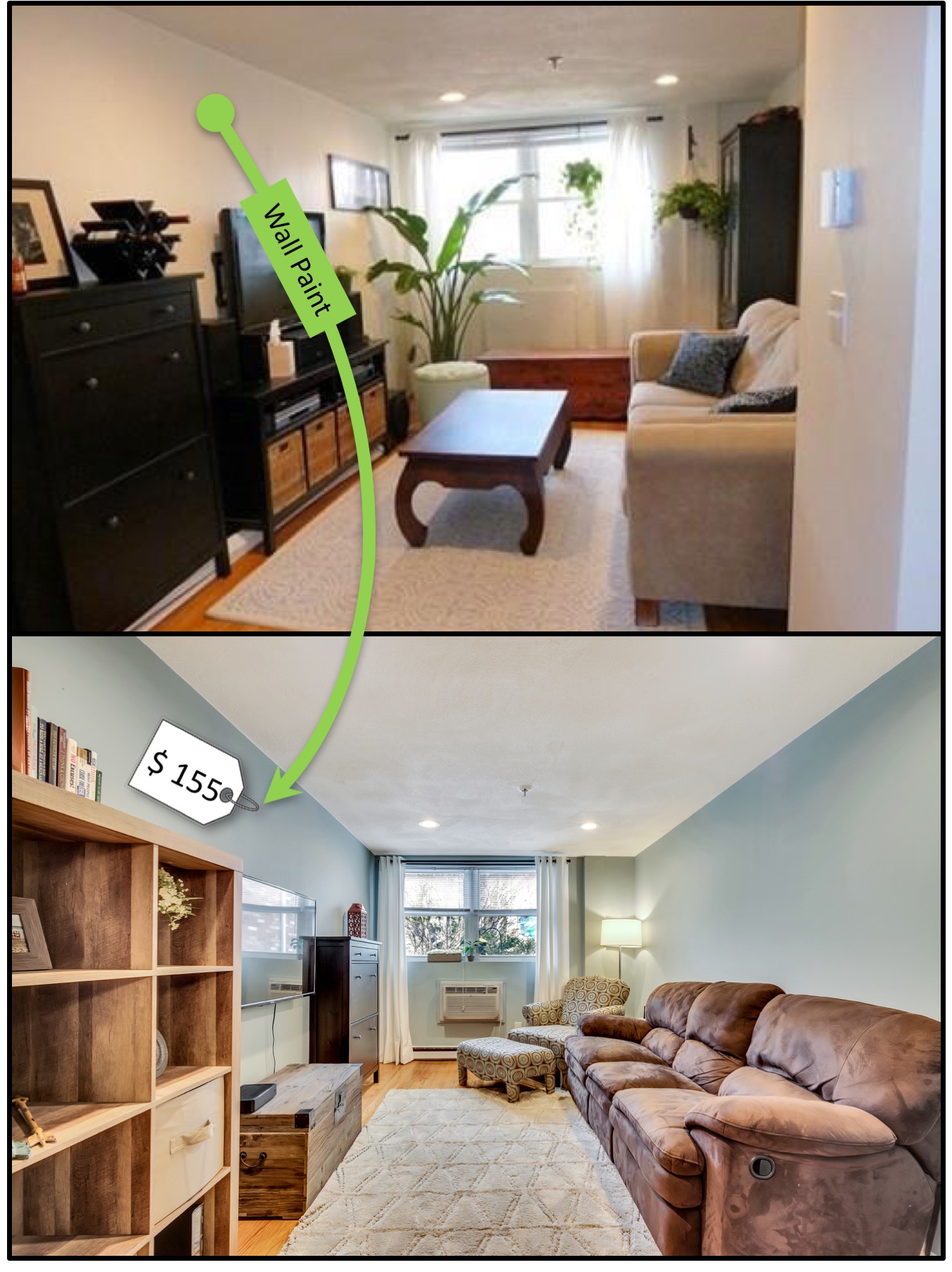 Last, but not least, how do I ask my tenants to move all their furniture into the center of the rooms numerous times so I can spend days painting the walls and trim? And move most of their stuff in the PODS for a week straight as well as deal with non-stop showing requests for four days straight? If you answered cut their rent in half for that time (Three months in all), you’d be right! The [cough] $1,800 I refunded them for their help in giving the place that “staged” look was the last touch that brought it all together (and kept the tenants happy despite the chaos).